Focuses on practical elements of modeling. Very skimpy on the math, but can get that elsewhere. Most of the value is in working through the exercises.

Hypothesis <-> model <-> data are many-many relationships. Naive falsification is a myth - multiple hypotheses might have models which predict the same data, and one hypothesis might have multiple models that each predict different data. Worse, most interesting hypotheses are probabilistic. Eg 80% of swans are white - how many black swans do we have to see to falsify? How many blurry photos of Nessie do we have to see to falsify the no-Nessie hypothesis?

No free lunch. Bayesian inference always takes place within some model. Within the assumptions of the model being fitted, Bayesian inference is optimal. BUT IT CANNOT TELL YOU IF YOUR MODEL IS CORRECT. Small world vs large world.

Cute metaphor of statistical modeling tools as golems - immensely powerful but brutally unthinking. User is responsible for supplying all the wisdom and interpretation.

Multilevel models - models where parameters are themselves supplied by models. Typical reasons for use:

The distinction only seems to need stating because the history of the subject focuses on single-level models.

Information criteria are used to estimate prediction performance across different models. Still no free lunch - each criteria embodies some set of assumptions about prediction. But useful for detecting overfitting, and for comparing multiple non-null models.

Often useful to standardize input data into $\text{mean} + x * \text{stddev}$. Makes the resulting parameters easier to compare directly to each other. For large inputs, may avoid loss of precision. In linear models, removes the strong correlation between intercept and slope.

Posterior predictive distribution - sample from both posterior and model to compute prediction. Could compute it analytically, but we invented computers for this sort of thing. 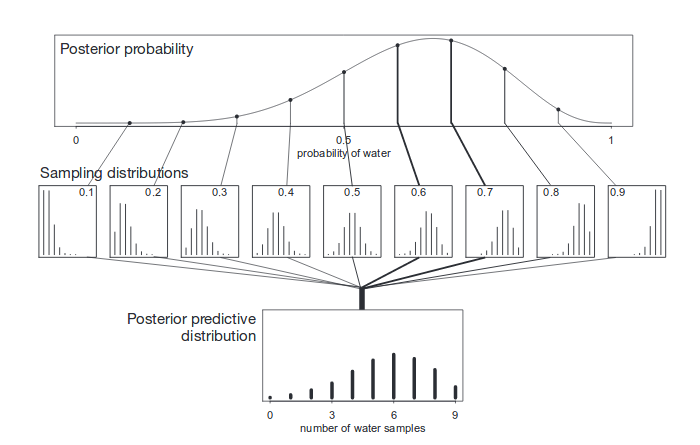 What if we need a point estimate? Choose a loss function appropriate to your decision problem, and choose the point estimate that minimizes expected loss under the posterior distribution.

Can display model uncertainty by sampling from the posterior and plotting the implied model eg for simple linear model plot the lines for each posterior sample.

Residual - difference between observation and prediction.

With multiple predictors, can no longer visualize predictions directly with a line + hpdi. Can use:

Non-identifiability - when data and model structure do not allow estimating the value of a parameter.

Model outcome as linear function of predictors plus Gaussian error.

Posterior for variance parameter tends to have a long right tail, because we know it’s non-negative. This makes the quadratic approximation suspect. Better to estimate $\log{\sigma}$ instead, which is closer to Gaussian. In general, using exponentials to constrain parameters to be positive, rather than using a one-sided prior, is a useful trick.

Can use multivariate linear regression to ‘control’ for effects of multiple variables.

Multicollinearity - when two predictor variables are strongly correlated, any linear combination of them will be equally plausible. Symptom is large spread and high covariance between posteriors for the two variables. (Special case of non-identifiability).

Polynomial regression - model outcome as polynomial of predictors plus Gaussian error. Not generally a good choice - hard to interpret and prone to overfitting. Better to start from a hypothesized mechanism.

Can’t judge significance by looking at marginal distributions of posterior - may be strong correlations between parameters. Eg may find that two parameters may both be centered around 0, but making one small makes the other large and vice versa. Safer to compare model with and model without parameter.

I found this section really hard to follow. Eventually realized that it’s notational sloppiness - not clearly distinguishing between expectations under reality and expectations under observation, and lack of clear indices on sums. These notes are heavily supplemented by other sources.

Regularization - use strong priors to penalize models which we believe are unlikely. Reduces over-fitting.

Cross-validation - partition the data into training and test set. Test how sensitive the parameters are to the partitioning.

For prediction tasks we can just choose models based on some cost function that matches the task. For scientific work we care about the model itself, so there is no clear cost function. KL-divergence from reality is a popular measure. The use of KL-divergence is really poorly justified in this text.

Minimizing KL-divergence is equivalent to maximizing the likelihood of the posterior over the observed data. Define deviance as $D(q) = -2 \sum_i \log(q_i)$ (summing over data). Roughly speaking, deviance : divergence as mean : expectation.

Bayesian Information Criterion. Can be heavily influenced by choice of prior - not recommended.

Uniformitarian assumption - future data are expected to come from the same process as past data, with a similar range of hidden parameters. Pretty hard to avoid. Induction problem, basically.

Akaike weight - map WAIC to probability scale, normalize across models. Use to compare relative accuracy. No consensus on how to interpret these weights - Akaike says:

A model’s weight is an estimate of the probability that the model will make the best predictions on new data, conditional on the set of models considered.

With enough model generation and comparison, we can overfit again.

For linear interactions, multiply predictors together in the model.

Interactions are symmetric, so be sure to consider both interpretations.

Really hard to interpret, so definitely have to plot predictions now. Can use multiple plots to view interaction effects - varying predictor A across plots and predictor B within plots.

Rule of thumb - use four-ish short chains to check that fitting is well-behaved, then use one long chain for actual inference.

Check that traces are stationary (same distribution over time) and well mixed (low correlation between adjacent points, no obvious patterns). Check that the estimated number of effective samples is high and that the potential scale reduction factor $\hat{R}$ converges to 1 (> 1.01 is suspicious).

Also simulate data from the model and check that inference recovers the original parameters.

Both are usually fixed by adding weakly informative priors.

When choosing priors and likelihood functions, prefer the distribution with the maximum entropy that fits the constraints. Because:

Wikipedias explanation of the Wallis derivation was easier to understand than the book.

Bayesian updates can be seen as a special case of minimizing cross entropy. Using the maximum entropy principle to justify minimizing cross-entropy is linguistically confusing. Think of it as minimizing information gain in both cases?.

Found a paper with the derivation but I couldn’t follow the notation after (32), so I worked through a really simple example instead:

Histomancy - trying to choose distribution by looking at histograms of data. Doesn’t work because distribution is for the residuals after the linear model and link function - can’t see it in the original data.

(To use WAIC, we need to disaggregate the aggregated binomial model to get individual points.)

Deal with multiple outcome events either by normalizing multiple weights:

Or by using multiple Poisson processes:

Use sensitivity analysis to understand how choice of distribution and link function affect the results.

Beware - information criterion can’t compare models with different distributions, because the constant part of the deviance no longer cancels out in the difference.

Use multiple distributions to model a mixture of causes.

Ordered categorical model. Ordered categories such as ratings can’t be treated just like counts because they may produce non-linear effects eg moving a rating from 1/5 to 2/5 may be a bigger change than moving from 3/5 to 4/5.

I think the idea here is that the $\alpha_k$ map the ratings onto a linear scale and then variation in each case is modeled by $\phi_i$. Not confident though.

Zero-inflated models. Sometimes there are multiple ways to get 0 eg maybe there really were no bacteria in this sample, or maybe we screwed up and sterilized it while inspecting it.

Over-dispersion - when variance is higher than expected in the model results. May indicate missing predictors. Common strategies to deal with it include using a continuous mixture model or using multi-level models.

Beta-binomial model - a continuous mixture model that estimates a different binomial parameter for each case. (Uses a beta distribution because there is a closed form solution for the likelihood function.)

Negative-binomial / gamma-poisson model - a continuous mixture model that estimates a different poisson parameter for each case. (Uses a gamma distribution, again, to make the math easy).

(Beta-binomial and negative-binomial effectively add a hidden parameter per case, so can’t be aggregated or disaggregated without changing the structure of the inference which means they can’t be compared with WAIC.)

Want to pool information between different groups, but only to the extent that the groups appear to be similar. So instead of inferring parameters independently for each group, model those parameters as being drawn from a common distribution.

The higher level prior can end up much more strongly regularizing than one the user would set by hand, in which case the lower level estimates will tend to shrink towards the mean and the effective number of parameters in WAIC will be lower than the single level model.

Can think of this as an adaptive tradeoff between complete pooling (ignore groups, treat all cases the same) and zero pooling (infer parameters for each group independently). In small groups, zero pooling risks overfitting. In large groups, complete pooling wastes valuable information. Partial pooling with a multilevel model smoothly trades off between the two across varying group sizes.

Any batch of parameters with exchangeable index values can and probably should be pooled. (Exchangeable just means the index values have no true ordering, because they are arbitrary labels.)

(Where $\operatorname{LKJcorr(\eta)}$ at $\eta = 1$ is a flat prior over all valid correlation matrices and at $\eta > 1$ is increasingly skeptical about strong correlations.)

Non-centered parameterization - use adaptive priors that express only correlation, not covariance, and use linear model to rescale. Otherwise many HMC engines struggle with varying effects models.

Gaussian process regression - handle continuous categories by building the covariance matrix from the distances between cases.

(Where $D_{ij}$ is the distance matrix, $\rho$ governs the decline of correlation as distance increases, $\eta$ determines the maximum covariance between groups and $\sigma$ describes covariation between multiple observations from the same group.)

Measurement error can be modeled directly.

Missing Completely At Random imputation - assume missing fields are selected uniformly at random. Generative model pulls exact values from data where they exist and puts in a generic variable otherwise.

The combination of arbitrary generative models and model comparison makes far more sense to me than significance testing, which I never really wrapped my head around.

I still don’t know how to use Stan. I don’t think the wrapper library in this book worked in my favor. Using R is a pain too. Maybe I should try out PyMC3.