After anki trashed my history, uploaded the trashed history to the sync server, and then repeatedly re-synced the trashed history every time I tried to restore from backup, I wrote my own spaced repetition app. It reads input from a markdown file, asks questions in the terminal and stores state in a json file. I wrote those few hundred lines of code in an afternoon and I've been using it ever since.

I wanted to run it on my android phone too, but after several days of struggling and several gigabytes of IDE downloads I lost interest.

This is my typical experience. Extending and customizing my laptop is a routine affair. Extending and customizing my phone is so painful that I give up every time. The software on my laptop feels like a comfortable old boot, worn in over years of tweaking and scripting. The software on my phone feels like a slot machine that moves all the buttons around once a month and holds my eyes open while the ads play. It's shiny and polished, but it isn't on my side.

The pinephone is a $150 mobile phone that aims to be able to run mainline linux. I bought one hoping to create an experience more like the experience of using my laptop.

Obviously writing an entire mobile suite is a big project, so I'm relentlessly cutting corners wherever possible and adopting an aesthetic of simplicity > capability. 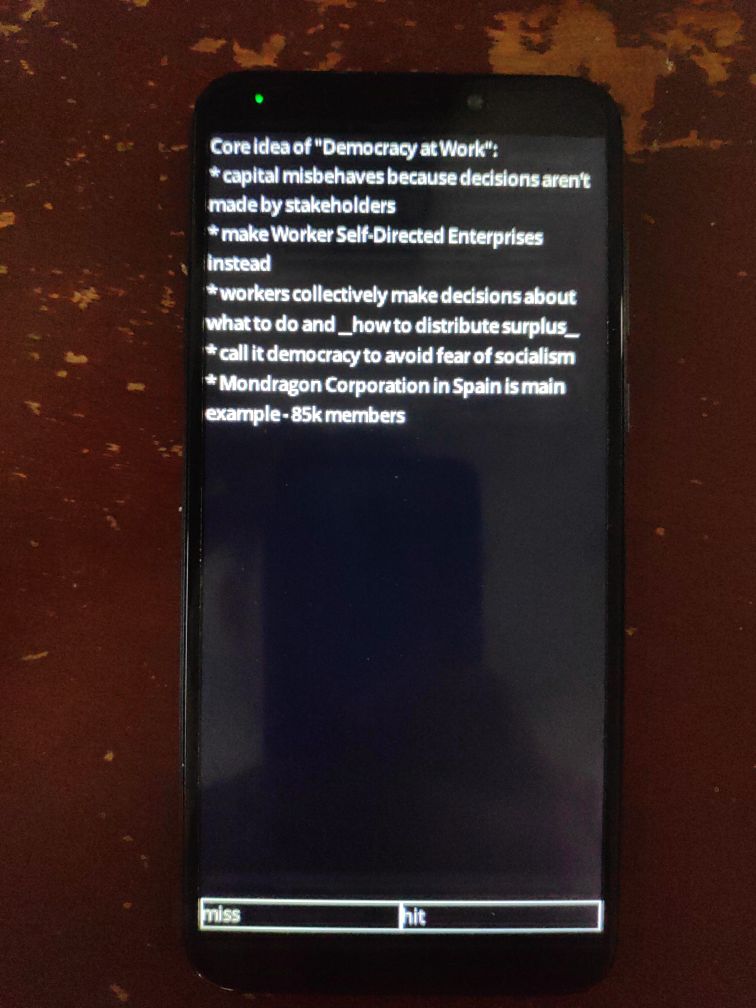 I installed mobile-nixos. The docs at the time were very barebones but samueldr was kind enough to walk me through it over irc and I wrote down the process here.

I haven't gotten around to writing a system configuration yet, but once I do it will be a single-click deploy with nixops deploy -d focus - a big improvement over the LineageOS update process. The default configuration looks like this.

Since the phone is running a normal linux userland it is possible to compile directly on the phone. But my laptop compiles things ~10x faster so it seemed worth investing in cross-compilation.

The first step is getting hold of arm64 versions of all my dependencies. This is done in shell.nix.

I pin the version of nixpkgs to make sure that both local and remote development use the exact same version of each dependency.

Most config is shared between local and cross builds, so shell.nix takes a boolean argument that tells it which we're attempting.

I wrote everything in zig because I'm trying to keep the whole system small, simple and fast. Zig is a small, simple, fast language that also cares a lot about cross-compilation.

The build.zig is mostly self-explanatory. Cross-compiling with zig takes almost no effort.

The one hitch is that it struggled to find headers using pkgconfig when cross-compiling. I haven't tried to debug this - just passed them directly instead.

Zig also didn't set paths correctly in the resulting binary but this is reasonable - there is no way for it to know that I'm cross-compiling to an identical nix system so it defaults to some reasonable heuristics. I just patch the binary after compilation.

The build process is then either zig build local or zig build cross && ./sync.

Since both laptop and phone are running the same operating system with the same pinned dependencies I don't bother to use a virtual machine for local development. I can just mock out the device sensors in code and everything else will run the same.

I'm writing an immediate-mode GUI library because I find them much simpler than most retained systems, in terms of both lines of code and mental overhead. Our Machinery recently gave a GDC talk that lays out the rationale.

Battery usage is often given as a concern, but on my laptop this app hovers around 1% cpu at all times whereas gnome-calculator reaches 20-30% whenever I press buttons. If this becomes a problem with more complex UIs I can add some caching at the draw command layer.

There are definitely some things that may be difficult to do well in immediate-mode, like complex reactive layouts, but luckily they aren't things that I care about doing on my phone.

I copied my renderer and font atlas from microui and I've built just enough UI library to get things working. Here is the entire UI for the spaced repetition app:

I really like that it's just straight code - not split across multiple files or classes or callbacks. You can just read it from top to bottom. If I want to abstract over some component or layout I can just put it in a function.

Obviously it needs a lot of work to improve anti-aliasing, fonts, layout etc, but I think those can be done without complicating the interface above.